HOW HE GOT CAUGHT

For Larry Nassar, the beginning of the end comes in the summer of 2016, thanks to three things: a tough police detective, a dedicated team of journalists in Indiana, and a homeschooling mom from Kentucky.

That mom is Rachael Denhollander. She’s also a lawyer and a devout Christian.

If you’ve seen coverage of the Larry Nassar case, Rachael’s face is probably a familiar one. 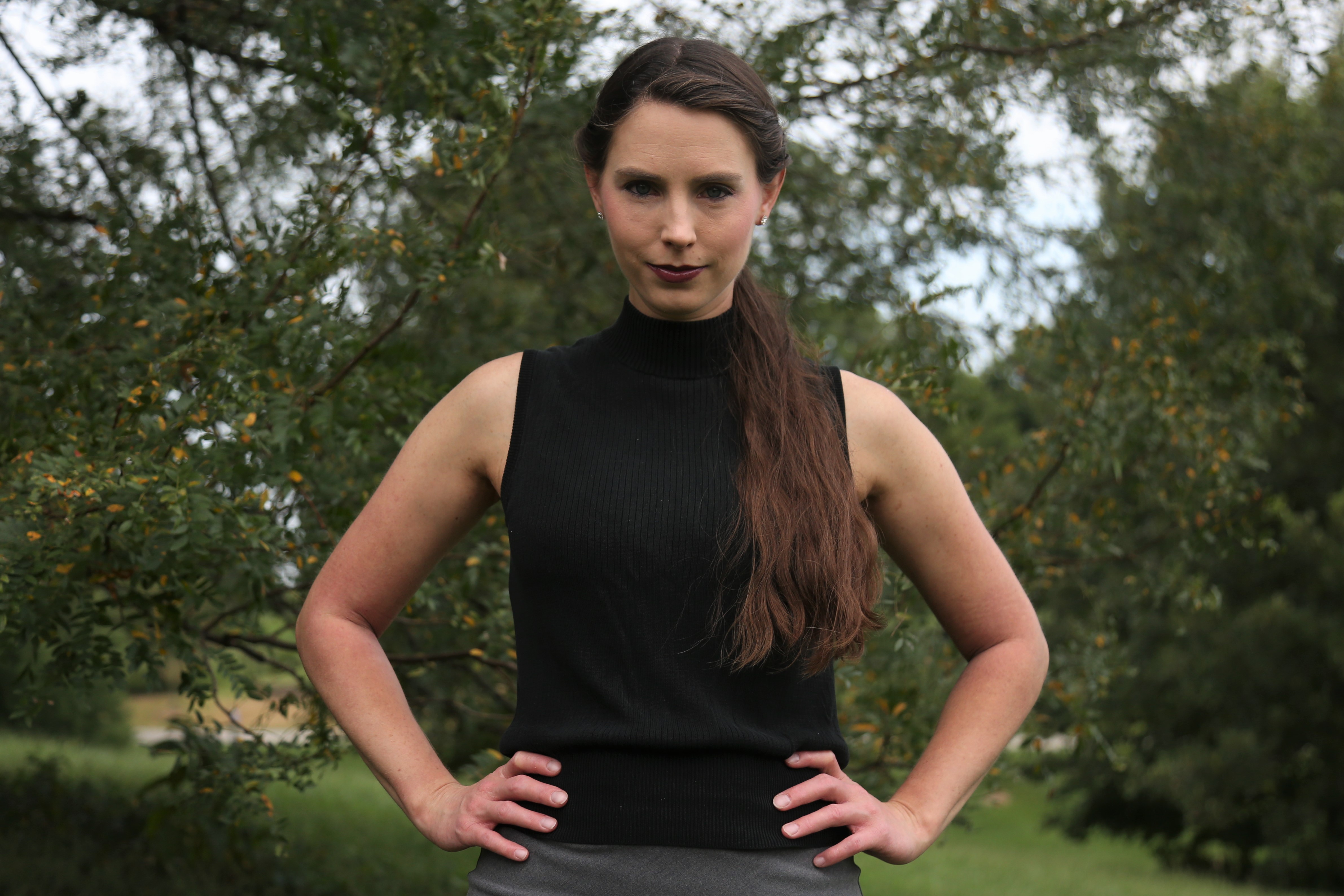 Back in the summer of 2016, an article on Facebook caught her eye.

“I don’t think I’ll ever forget seeing the article come through,” she says.

It was this big investigation in The Indianapolis Star about how USA Gymnastics had been covering up complaints of sexual abuse against coaches; coaches who were able to move from gym to gym, abusing kids.

Rachael had been waiting for that moment for 16 years.

Because Rachael had also been abused… not by a coach, but by Dr. Larry Nassar, back in 2000 when she was a high school gymnast.

Back then, when Rachael worked up the courage to tell her mom she was abused, she and her mom prayed about what to do. Go to the police? The local paper? But Rachael didn’t think anybody would believe her. She was a mediocre gymnast. Larry was an Olympic doctor. Even at 17, Rachael says, she knew how that situation would go. So her mom sat Rachael down and said:

“‘You cannot bury this, this will destroy you; so I’m going to help you deal with this. I’m moving your bedroom to the basement so you can have privacy. Here’s a journal. I’m going to help you learn how to journal,’” recalls Rachael. “And she just helped me walk through the healing process but gave me the space to do it.”

Rachael took her mom’s advice. And did what she always does: she went to work.

She started researching intravaginal techniques. She talked to specialists. She pulled her own medical records from her appointments with Dr. Nassar. She says there’s nothing in them about penetration.

Slowly, over the next 16 years, Rachael built her own case file: journal entries as a teen, opinions from pelvic floor experts, notes from her therapist.

She figured, it may be too late for her, but if there were ever a chance to speak up, to be believed, she’d take it.

When she saw that big investigation in The Indianapolis Star, she knew it was time.

“I opened it up and I read it and my first thought was ‘I was right. They’ve been burying stuff the whole time. There’s nothing I could’ve done. I was right.’”

But it’s also an opportunity. Larry’s not a coach, but he is a big name in USA Gymnastics.

At the bottom of that IndyStar article, there was an email address. A tip line.

The guy who got her email is an IndyStar reporter named Mark Alesia.

He remembers getting into the office early that morning. He wanted to get a jump on any tips coming in now that the story was out. And there was Rachael’s email:

“I have seen little hope that any light would be shed by coming forward, so I have remained quiet. If there is a possibility that is changing, I will come forward as publicly as necessary.”

Mark reached out to Rachael. Told her he’d love to talk, and that they could talk off the record and decide later what she would be comfortable with publishing.

“She got back to me and said, ‘I’m willing to do anything you need. I want this to end. And if it ever will, it will now when people are watching and maybe more willing to believe.’”

Then Mark got a second tip about Larry: a voicemail, from a national champion gymnast.

Then, the paper got a third tip about Larry; a former Olympian was planning to file a lawsuit against him.

(We now know that woman is Jaime Dantzscher. She was on the U.S. Olympic gymnastics team in 2000. She says Larry abused her as early as the mid 1990s).

“To me, that’s when, that was the moment when I thought, ‘oh my God, we might really be onto something,’” says Mark.

Mark let Rachael know she wasn’t the only one, that they were getting more tips about Larry.

But Rachael was different. She was the only woman willing to use her name on the record.

After talking to Mark at the paper, Rachael found out it wasn’t too late for her to call the police. So before IndyStar published its story, she called a non-emergency number in East Lansing, Michigan and eventually got routed to police at Michigan State University.

Rachael knew Larry still worked at MSU. She worried police there might know him, and protect him. But luckily for Rachael, Detective Andrea Munford got her call.

The thing you need to know about Detective Munford is that she’s got a motto: Start by believing.

It may sound like a cliché, but Munford makes it her mission to teach other police officers how trauma works and how to treat survivors in a way that doesn’t accidentally re-traumatize them.

She’s been trained in the theory that sometimes trauma can damage a rape victim’s memory and they might act in ways you wouldn’t expect — like laughing during an interview, or, in Rachael’s case, not feel like they can even report their assault for 16 years.

On the phone, Detective Munford asked Rachael, “May I have this doctor’s name?”

Munford stopped, realizing there had been a complaint about that guy before.

She finished her conversation with Rachael, and went across the hall to Val O’Brien’s office.

If you don’t remember, O’Brien’s the MSU detective you heard in the last episode. She’s the one who handled Amanda Thomashow’s sexual assault complaint against Larry in 2014.

“And so it was like, here we go, like what’s going to come forward and what are the chances of two complaints against that doctor?” says Munford.

So Detective Andrea Munford asked Larry to come into the station.

We got this tape through a public records request. Watch the full interview below:

At first, so much of this video looks like the last time Larry was here in 2014 — the cramped, windowless interview room; video camera up on the ceiling.

But this time, Detective Munford is the one asking the questions.

She is a master of stillness. Somehow, she can make the act of just listening feel intimidating.

At first, she doesn’t tell Larry why he’s there, just lets it seem like a casual check-in. She lets Larry blabber on and on about his medical techniques. Larry’s comfortable. He’s run this spiel before.

But then, she starts nailing Larry down on specifics. She gets him on the record denying that he penetrates patients. And she is not buying his story.

“I think he was getting concerned,” says Munford when we asked her to tell us what she was thinking during the police interview. “He was just, his composure was really faltering, and so I just kept going.”

At the end of their interview, Andrea tells Larry the police will be looking into the complaint.

While MSU police investigated, the IndyStar published its first story about Larry Nassar — Rachael’s story. It came out September 12th, 2016. It was a bombshell. 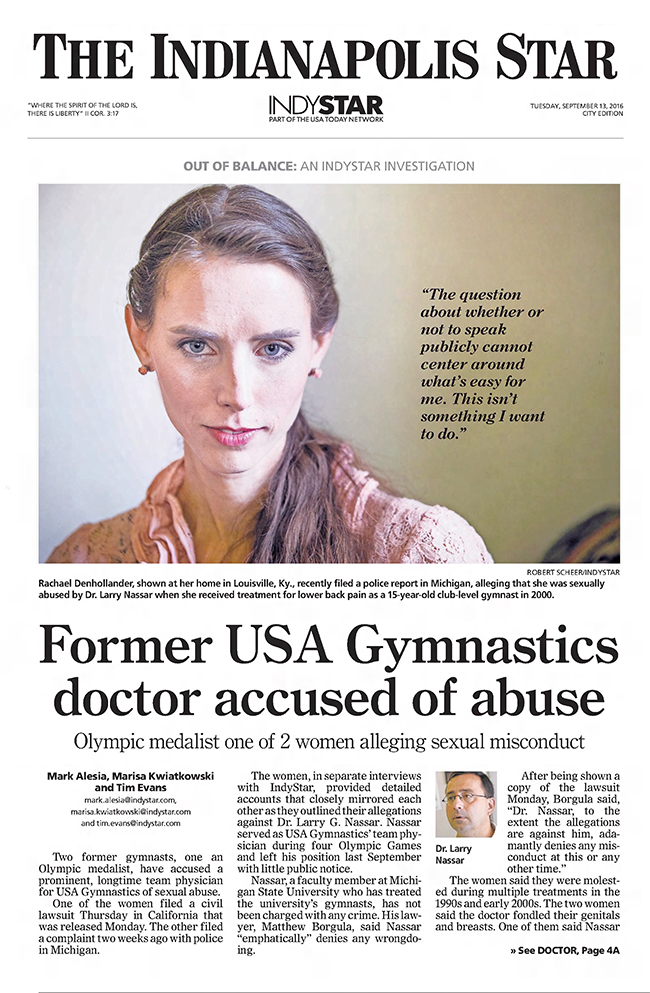 In the immediate aftermath of the story, a few more women and girls came forward.

But even with the evidence mounting against Larry, many people continued to support him.