"WHAT HAVE YOU DONE?"

On the morning of September 20, 2016, ten police officers show up at Larry Nassar’s home with a search warrant.

An officer notices that a brown trash bin at the end of Larry’s driveway is still full. By sheer chance, the garbage truck was running late that day.

The officer dumps Larry’s trash in the back of a police pickup truck.

When they get it back to the station, officers comb through Larry’s garbage, where they find a little plastic grocery bag that’s filled with what looks like bathroom trash — q-tips, face wipes, Kleenex…and three external hard drives. Two of the drives have “Larry Nassar” written right on them.

Police discover 37,000 images of child pornography on those hard drives.

Later, Trinea Gonczar gets a phone call from a law enforcement official. Trinea says she remembers the person saying: “We can’t tell you if it’s you, but there were images of little girls in his bathtub.”

You met Trinea in Episode One. Larry had treated her gymnastics injuries for decades — and she trusted him, without question. And when you love someone, trust them completely, and then discover something that makes you question if you ever really knew them at all, it can be difficult to accept the truth.

When Trinea and her mom, Dawn Homer, saw that very first article about Larry in 2016, the one with Rachael Denhollander, they were devastated to see him accused. But Trinea says, “I honestly thought he’s got enough doctors on his side. Someone’s going to come forward and clear him, like someone’s going to explain that this treatment is legitimate.”

It’s not that they don’t believe Rachael, exactly. It’s more like, they’ve seen this play out before. Someone accuses Larry, but then it’s declared a misunderstanding, and everything’s fine again.

Each time Larry was believed instead of his accusers, Trinea’s trust in Larry was reaffirmed: it is legitimate treatment, she thought. Poor guy is just misunderstood.

So when Trinea saw Rachael’s story in the IndyStar in 2016, she was sad. Sad for Larry. Sad for his wife, Stefanie, and their kids.

“And I felt really bad for our gym, you know, all these people that love this person, like so much love for him,” she says.

In the fall of 2016, Larry was arrested for criminal sexual conduct.

Even then, Dawn says, she and Trinea still could not believe that Larry would hurt anyone. Not intentionally.

Believing the truth about Larry was gradual for Trinea. A process with a few key moments.

The first was on her birthday in December 2016. The same day the federal government charged Larry Nassar with receiving and possessing child pornography.

It was around this time she received that call from the law enforcement official, telling her about the images of little girls in Larry’s bathtub and how they couldn’t say for sure if she was in the photos or not.

She says this phone call made her think back to when she was a kid, going to Larry’s apartment for treatment, icing down in his bathtub.

“You know, it’s like when you really realized that there’s another side to someone and at that point I was kind of still like, I knew that it was not good,” Trinea says. “I knew that things were not good and I knew that this had happened to me, but I was not in a space yet where I was like, ‘I’m going to come forward.’”

Larry pleaded guilty to possessing child pornography in the summer of 2017, and faced the prospect of a lengthy prison term.

By the fall, Povilaitis says they had 125 reported sexual assault victims. And she wanted a conviction for those crimes.

Larry’s attorneys reached out to her about a plea deal, agreeing to plead guilty to sexually assaulting seven minors under the age of sixteen.

Povilaitis went out on a limb and added two stipulations to the plea deal. First, Larry would have to admit, in court, that there was no legitimate medical purpose for what he did to those girls, and that he did it for his own sexual gratification. And second, every single survivor would get to face him in court and make a statement.

On November 22, 2017, Larry Nassar stood in front of a judge, listening to his attorney read him the terms of the plea agreement. He admitted that his procedures were not for any medical purpose.

The very same week Larry pleaded guilty to abuse, Trinea’s life changed again: she found out she was pregnant.

If the first turning point for Trinea was the child pornography, then getting pregnant was the second pivotal moment. She made an appointment with an OB-GYN. But before she could go, she began to have anxiety attacks.

“So I called my husband like completely freaking out, like, ‘what do I do?’ And he’s like, ‘well, do we need to talk to a counselor?’”

Trinea started seeing a therapist. And memories started coming back to her, from around the time she was 10 years old and a gymnast at Great Lakes Gymnastics, where Larry was a trainer, where he taped girls up in the back room at the gym. 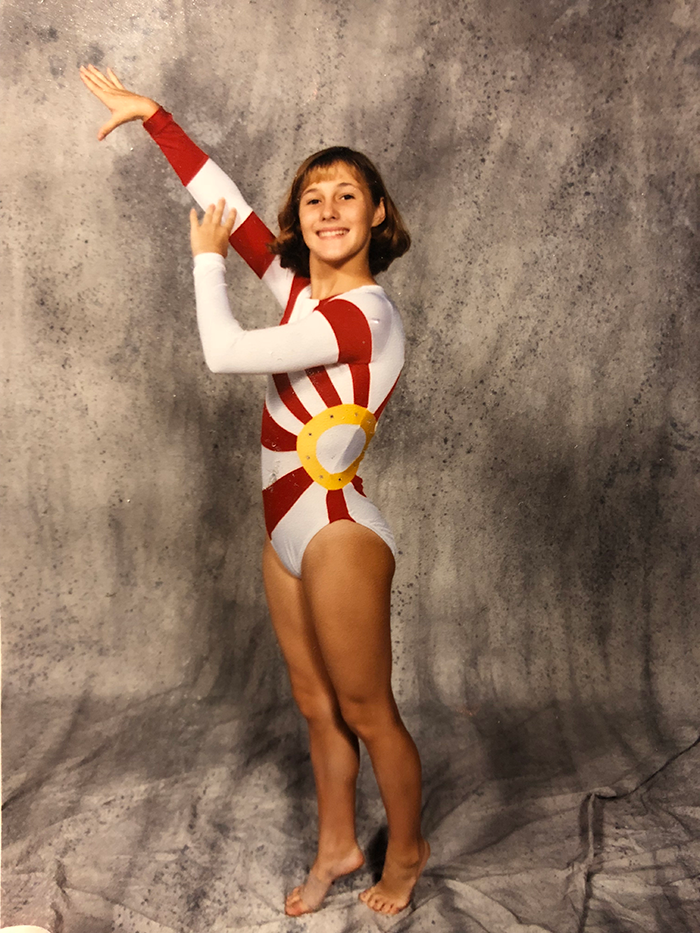 “And I started to have these memories, like of Great Lakes, when there would be covers over the windows. Like, why were there covers over the windows? I don’t know, because it doesn’t make sense now looking back. But none of the parents were allowed in that back room. And why else would there be something over those windows? You know, like you just start, all of a sudden you start remembering things that you just never questioned or never even thought twice about.”

It’s not until January of 2018 that Trinea goes to see an attorney, one who was representing several other Nassar survivors.

“And he had me fill out like 18 pages of paperwork and that’s when they estimated the amount of times that this treatment had happened to me and he said, ‘I just want to prepare you, but you’re the highest of the treatments.’”

Because Trinea saw Larry so many times for so many years, she had received more of Larry’s “treatments” than any other survivor who’d come forward at that time.

Back then, when she was a gymnast, she didn’t recognize it as abuse. Now, she’ll half-jokingly call herself the “practice body.”

After meeting with the lawyer, Trinea still wasn’t sure she wanted to speak in court. But she was invited to a gathering the night before Larry’s sentencing began.

It was there she heard Kyle Stephens’ story. For Trinea, hearing how Kyle was abused by Larry in his basement starting when she was just six years old, that was the final moment that changed how she thought about Larry.

“I was so furious. Like I literally want to kill him at that moment to hear her story. I was just so angry for this poor girl. And like that’s when I really transitioned myself into the decision of I can’t support him anymore and I need to support the girls. Like I need to be here for these girls. I need to make friends with these girls, like I need to, however I can be there for them.”

The next morning, January 16th, 2018, was Larry Nassar’s sentencing.

Over the course of a week, 156 women and girls came forward, with a brutal stream of tears and rage. They spoke of suicide attempts and shattered families.

But Larry sat stone-faced in the witness stand, pale and unshaven with his gold wireframe glasses.

On the fourth day of sentencing, Trinea made her statement.

Her mom Dawn remembers watching Larry, sitting at the front of that courtroom, in the witness stand.

“When I saw him listening to the other gals, he was just stone,” says Dawn. “He didn’t show emotion. He didn’t look up. He didn’t even the slightest bit respond when they would ask a question, which I thought that was pretty amazing on his part because I don’t know how I would have been able to blacken out all the conversation. But when he saw Trinea, his face completely drained and I thought, ‘oh, we’re in for something here.’”

Dawn, standing beside her daughter while she speaks, sees Larry — for the first time in this entire court case — cry. Open, uncontrollable weeping.

“I had to make an extremely hard choice this week, Larry. I had to choose whether [to] continue supporting you through this or to support them: the girls. I choose them, Larry. I choose to love them and protect them. I choose to stop caring for you and supporting you. I choose to look you in the face and tell you that you hurt us, you hurt me. I hope you will see it from me in my eyes today that I believed in you always until I couldn’t anymore. I hope you cry like we cry. I hope you feel bad for what you’ve done. I hope more than anything, each day these girls can feel less pain. I hope you want that for us, but this is goodbye to you, Larry and this time it’s time for me to close the door. It’s time for me to stand up for these little girls and not stand behind you anymore, Larry.