We tried to talk to Larry and his family.
Here’s what we heard. 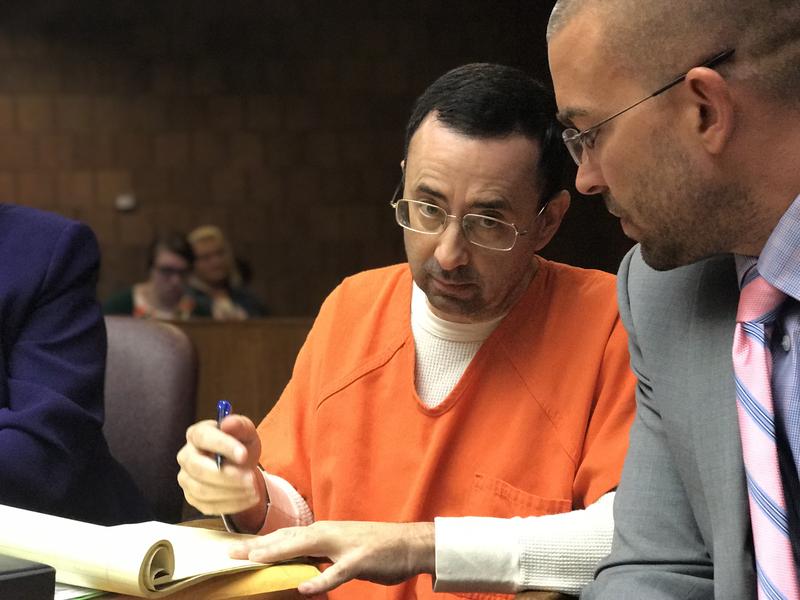 I wrote Larry Nassar in prison, to let him know about the podcast we were creating about his case. I wanted to see if there was any chance he’d take part. I didn’t hear back.

I also wrote his ex-wife. No response.

I don’t blame them, frankly. But I would’ve loved to talk to them, to get more perspective.

Larry’s dad and both his older brothers are dead, although his elderly mom appears to still live in Michigan.

I wrote his two sisters in Metro Detroit to see if they’d talk. His oldest sister wrote me back.

In a handwritten letter on lined loose-leaf paper she “respectfully” declined to be involved:

“The media has proven to us over and over again that it does not know how to report a story without inflammation and distortion. Facts should be verified and proven true and accurate, not based on hearsay. We would gratefully appreciate it if your station respected and considered our family by not airing this podcast. It will only continue to keep the situation inflamed and distorted and prevent the healing they all claim to want.”

But there is more insight from Larry’s families in the public record. The court record.

About a year ago, I was fascinated to read seven letters of support for Larry Nassar.

They were addressed to the Honorable Judge Janet Neff, the federal judge who would sentence Larry for possessing 37,000 images of child pornography.

Larry’s two older sisters, two brothers-in-law, a sister-in-law, and a cousin all wrote letters that November 2017, just before he was sentenced to 60 years in federal prison. Before his sentencing for criminal sexual assault.

The letters paint Larry as a “kind, compassionate, caring” man. The youngest of five in a devout Catholic family.

Always a helper. A fixer. A volunteer.

The court redacted the authors’ names. We’ve decided to protect their personal information because of the sensitive nature of this story as well, so I’ll refer to family members by their initials only.

“I remember him being late for dinner numerous times” another sister, N. W. wrote, because Larry was always so dedicated to volunteering as this sports trainer his junior and senior year of high school. He graduated in 1981.

Larry’s oldest sister (L.A.) is a dancer, who “tagged” Larry and his brother to be extras when her dance troupe performed The Nutcracker.

“Larry went to dance practice and rehearsals with me as well as watching as I taught classical ballet,” L. A. wrote the judge. She says Larry applied the stretches and exercises he learned in her dance classes to reduce injuries on the high school football team.

“Larry’s love of sports and keeping athletes in peak performance” is what drove him to become a sports medicine doctor, L. A. wrote.

She says Larry was an inventor, creating a couple of devices to reduce hand injuries in gymnasts. One of the strap systems was popular, she says. “Dad made the straps to Larry’s specification and mom filled the orders and mailed them.”

They praised Larry as a father, with a “great bond” to his three children. “On football Saturdays he would rather spend time with his kids than watch the games,” his sister in-law, R. R. wrote. “Larry’s heart is big.”

The letters detailed Larry’s efforts to support kids with autism. His oldest was diagnosed with the disorder.

L. A. says Larry started teaching Sunday school at church, in large part, because his daughter had trouble sitting through a whole service. “He would take her to class with him where he could keep an eye on her in the classroom while he taught the children about their faith,” she said.

Larry is motivated to give back to society, his family wrote the judge. Since he’s been imprisoned, he’s been helping other inmates get their GED, Larry’s brother in-law, E. W. wrote in November 2017. Other inmates have called him the “Miracle Doctor” for fixing their painful injuries, E. W. said.

“I will always love my cousin,” one family member concluded, “These charges do not reflect the man I know. I will continue to pray for him and his family and most certainly for the victims.”

His first Christmas in jail, E. W. says “Larry asked family members to send books written in Spanish for his roommate so that they could have a bit of joy during that time of year.”

This will be Larry Nassar’s third Christmas season in jail. He’ll first be eligible for parole in the year 2117. He’s currently 55 years old.